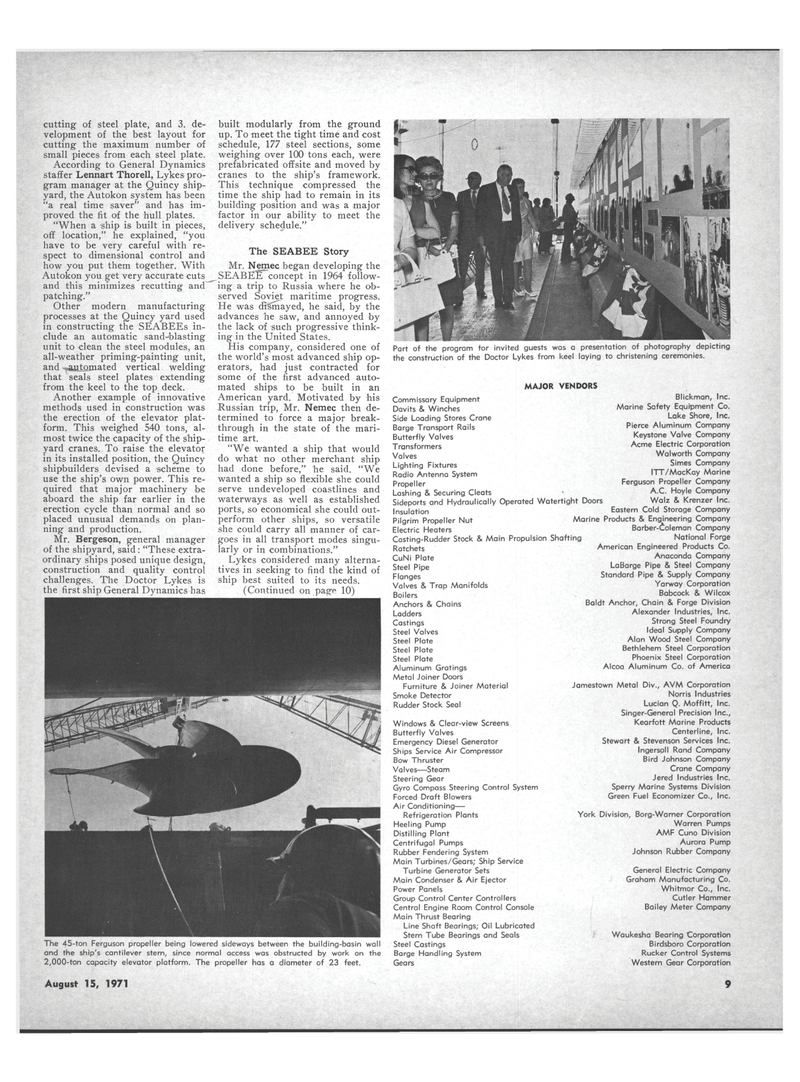 Part of the program tor invited guests was a presentation of photography depicting the construction of the Doctor Lykes from keel laying to christening ceremonies.

Western Gear Corporation cutting of steel plate, and 3. de- velopment of the best layout for cutting the maximum number of small pieces from each steel plate.

According to General Dynamics staffer Lennart Thorell, Lykes pro- gram manager at the Quincy ship- yard, the Autokon system has been "a real time saver" and has im- proved the fit of the hull plates. "When a ship is built in pieces, off location," he explained, "you have to be very careful with re- spect to dimensional control and how you put them together. With

Autokon you get very accurate cuts and this minimizes recutting and patching."

Other modern manufacturing processes at the Quincy yard used in constructing the SEABEEs in- clude an automatic sand-blasting unit to clean the steel modules, an all-weather priming-painting unit, and -^automated vertical welding that seals steel plates extending from the keel to the top deck.

Another example of innovative methods used in construction was the erection of the elevator plat- form. This weighed 540 tons, al- most twice the capacity of the ship- yard cranes. To raise the elevator in its installed position, the Quincy shipbuilders devised a scheme to use the ship's own power. This re- quired that major machinery be aboard the ship far earlier in the erection cycle than normal and so placed unusual demands on plan- ning and production.

Mr. Bergeson, general manager of the shipyard, said : "These extra- ordinary ships posed unique design, construction and quality control challenges. The Doctor Lykes is the first ship General Dynamics has built modularly from the ground up. To meet the tight time and cost schedule, 177 steel sections, some weighing over 100 tons each, were prefabricated offsite and moved by cranes to the ship's framework.

This technique compressed the time the ship had to remain in its building position and was a major factor in our ability to meet the delivery schedule."

SEABEE concept in 1964 follow- ing a trip to Russia where he ob- served Soviet maritime progress.

He was drlmayed, he said, by the advances he saw, and annoyed by the lack of such progressive think- ing in the United States.

His company, considered one of the world's most advanced ship op- erators, had just contracted for some of the first advanced auto- mated ships to be built in an

American yard. Motivated by his

Russian trip, Mr. Nemec then de- termined to force a major break- through in the state of the mari- time art. "We wanted a ship that would do what no other merchant ship had done before," he said. "We wanted a ship so flexible she could serve undeveloped coastlines and waterways as well as established ports, so economical she could out- perform other ships, so versatile she could carry all manner of car- goes in all transport modes singu- larly or in combinations."

Lykes considered many alterna- tives in seeking to find the kind of ship best suited to its needs. (Continued on .page 10)

The 45-ton Ferguson propeller being lowered sideways between the building-basin wall and the ship's cantilever stern, since normal access was obstructed by work on the 2,000-ton capacity elevator platform. The propeller has a diameter of 23 feet.