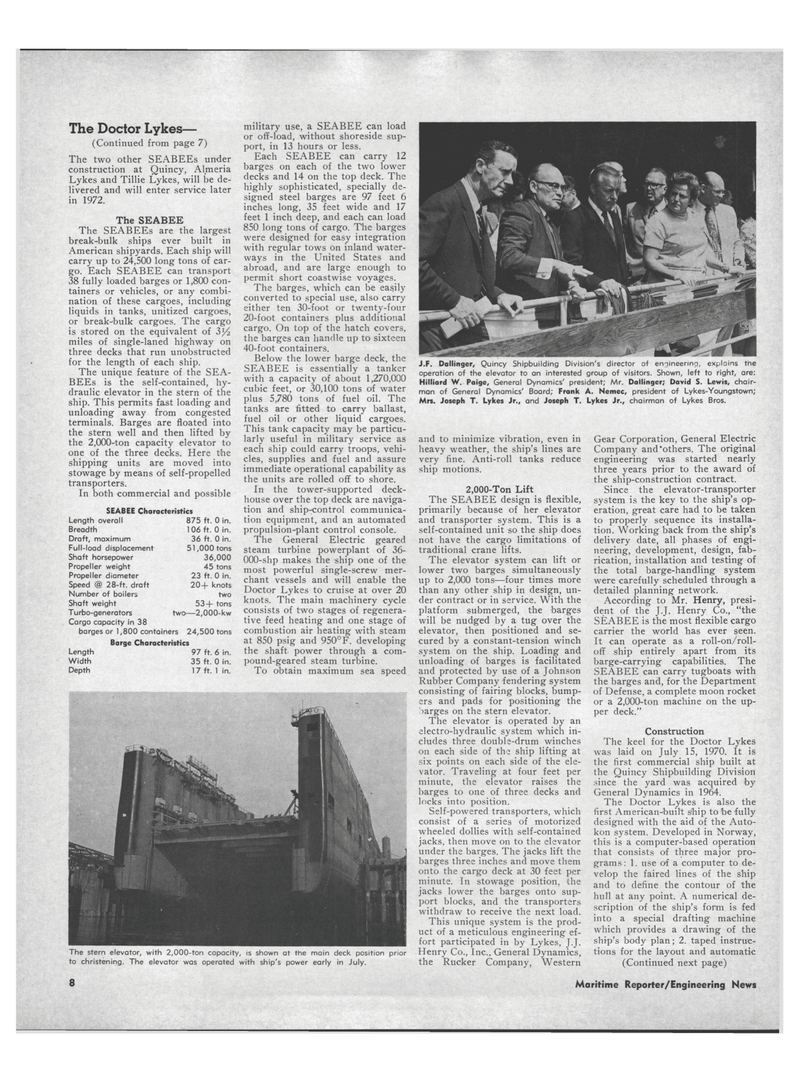 The Doctor Lykes— (Continued from page 7)

The two other SEABEEs under construction at Quincy, Almeria

Lykes and Tillie Lykes, will be de- livered and will enter service later in 1972.

The SEABEEs are the largest break-bulk ships ever built in

American shipyards. Each ship will carry up to 24,500 long tons of car- go. Each SEABEE can transport 38 fully loaded barges or 1,800 con- tainers or vehicles, or any combi- nation of these cargoes, including liquids in tanks, unitized cargoes, or break^bulk cargoes. The cargo is stored on the equivalent of 3Y^ miles of single-laned highway on three decks that run unobstructed for the length of each ship.

The unique feature of the SEA-

BEEs is the self-contained, hy- draulic elevator in the stern of the ship. This permits fast loading and unloading away from congested terminals. Barges are floated into the stern well and then lifted by the 2,000-ton capacity elevator to one of the three decks. Here the shipping units are moved into stowage by means of self-propelled transporters.

In both commercial and possible

Each SEABEE can carry 12 barges on each of the two lower decks and 14 on the top deck. The highly sophisticated, specially de- signed steel barges are 97 feet 6 inches long, 35 feet wide and 17 feet 1 inch deep, and each can load 850 long tons of cargo. The barges were designed for easy integration with regular tows on inland water- ways in the United States and abroad, and are large enough to permit short coastwise voyages.

The barges, which can be easily converted to special use, also carry either ten 30-foot or twenty-four 20-foot containers plus additional cargo. On top of the hatch covers, the barges can hanrlle up to sixteen 40-foot containers.

Below the lower barge deck, the

SEABEE is essentially a tanker with a capacity of about 1,270,000 cubic feet, or 30,100 tons of water plus 5,780 tons of fuel oil. The tanks are fitted to carry ballast, fuel oil or other liquid cargoes.

This tank capacity may be particu- larly useful in military service as each ship could carry troops, vehi- cles, supplies and fuel and assure immediate operational capability as the units are rolled off to shore.

In the tower-supported deck- house over the top deck are naviga- tion and ship-control communica- tion equipment, and an automated propulsion-plant control console.

Doctor Lykes to cruise at over 20 knots. The main machinery cycle consists of two stages of regenera- tive feed heating and one stage of combustion air heating with steam at 850 psig and 950°F. developing the shaft power through a com- pound-geared steam turbine.

J.F. Dallinger, Quincy Shipbuilding Division's director of engineering, explains the operation of the elevator to an interested group of visitors. Shown, left to right, are:

The SEABEE design is flexible, primarily because of her elevator and transporter system. This is a self-contained unit so the ship does not have the cargo limitations of traditional crane lifts.

The elevator system can lift or lower two barges simultaneously up to 2,000 tons—four times more than any other ship in design, un- der contract or in service. With the platform submerged, the barges will be nudged by a tug over the elevator, then positioned and se- cured by a constant-tension winch system on the ship. Loading and unloading of barges is facilitated and protected by use of a Johnson

Rubber Company tendering system consisting of fairing blocks, bump- ers and pads for positioning the barges on the stern elevator.

Self-powered transporters, which consist of a series of motorized wheeled dollies with self-contained jacks, then move on to the elevator under the barges. The jacks lift the barges three inches and move them onto the cargo deck at 30 feet per minute. In stowage position, the jacks lower the barges onto sup- port blocks, and the transporters withdraw to receive the next load.

This unique system is the prod- uct of a meticulous engineering ef- fort participated in by Lykes, J.J.

Company and "others. The original engineering was started nearly three years prior to the award of the ship-construction contract.

Since the elevator-transporter system is the key to the ship's op- eration, great care had to be taken to properly sequence its installa- tion. Working back from the ship's delivery date, all phases of engi- neering, development, design, fab- rication, installation and testing of the total barge-handling system were carefully scheduled through a detailed planning network.

SEABEE is the most flexible cargo carrier the world has ever seen.

It can operate as a roll-on/roll- off ship entirely apart from its barge-carrying capabilities. The

SEABEE can carry tugboats with the barges and, for the Department of Defense, a complete moon rocket or a 2,000-ton machine on the up- per deck."

The keel for the Doctor Lykes was laid on July 15, 1970. It is the first commercial ship built at the Quincy Shipbuilding Division since the yard was acquired by

The Doctor Lykes is also the first American-built s'hip to be fully designed with the aid of the Auto- kon system. Developed in Norway, this is a computer-based operation that consists of three major pro- grams: 1. use of a computer to de- velop the faired lines of the ship and to define the contour of the hull at any point. A numerical de- scription of the ship's form is fed into a special drafting machine which provides a drawing of the ship's body plan; 2. taped instruc- tions for the layout and automatic (Continued next page)

The stern elevator, with 2,000-ton capacity, is shown at the main deck position prior to christening. The elevator was operated with ship's power early in July. 8 Maritime Reporter/Engineering News