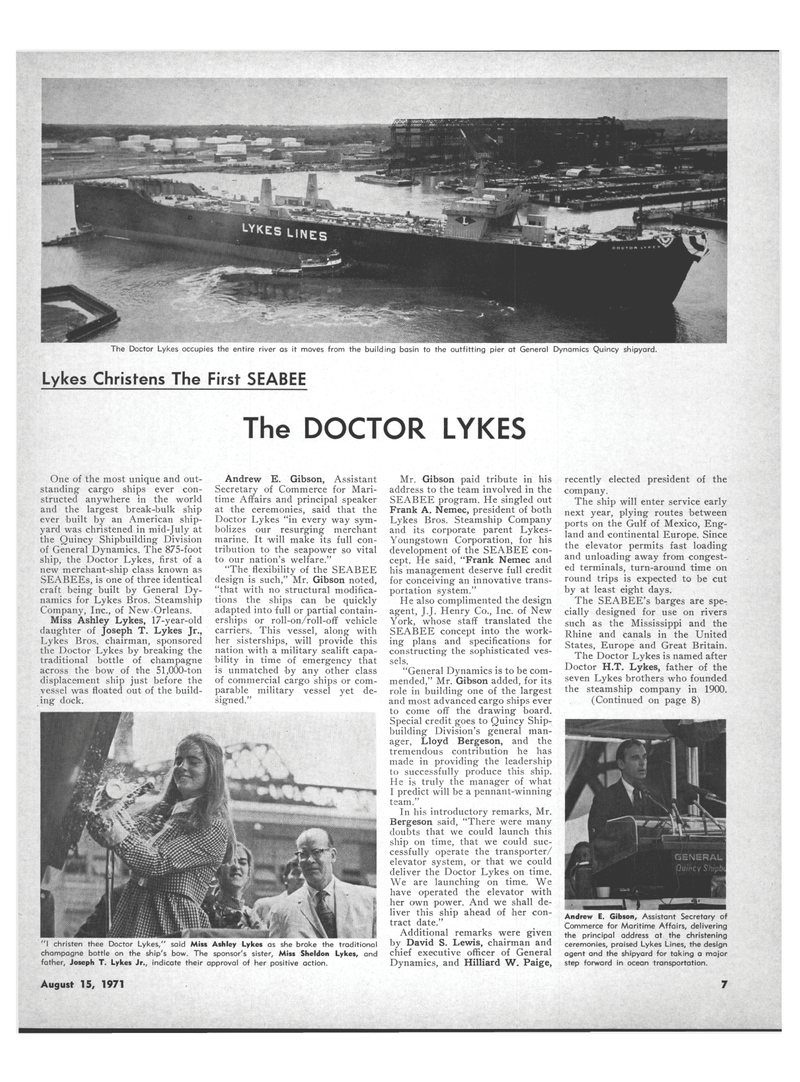 The Doctor Lykes occupies the entire river as it moves from the building basin to the outfitting pier at General Dynamics Quincy shipyard.

Mr. Gibson paid tribute in his address to the team involved in the

SEABEE program. He singled out

Frank A. Nemec, president of both

Youngstown Corporation, for his development of the SEABEE con- cept. He said, "Frank Nemec and his management deserve full credit for conceiving an innovative trans- portation system."

York, whose staff translated the

SEABEE concept into the work- ing plans and specifications for constructing the sophisticated ves- sels. "General Dynamics is to be com- mended," Mr. Gibson added, for its role in building one of the largest and most advanced cargo ships ever to come off the drawing board.

Special credit goes to Quincy Ship- building Division's general man- ager, Lloyd Bergeson, and the tremendous contribution he has made in providing the leadership to successfully produce this ship.

He is truly the manager of what 1 predict will be a pennant-winning team."

In his introductory remarks, Mr.

Bergeson said, "There were many doubts that we could launch this ship on time, that we could suc- cessfully operate the transporter/ elevator system, or that we could deliver the Doctor Lykes on time.

We are launching on time. We have operated the elevator with her own power. And we shall de- liver this ship ahead of her con- tract date."

Additional remarks were given by David S. Lewis, chairman and chief executive officer of General

The ship will enter service early next year, plying routes between ports on the Gulf of Mexico, Eng- land and continental Europe. Since the elevator permits fast loading and unloading away from congest- ed terminals, turn-around time on round trips is expected to be cut by at least eight days.

Rhine and canals in the United

The Doctor Lykes is named after

Doctor H.T. Lykes, father of the seven Lykes brothers who founded the steamship company in 1900. (Continued on page 8)

Commerce for Maritime Affairs, delivering the principal address at the christening ceremonies, praised Lykes Lines, the design agent and the shipyard for taking a major step forward in ocean transportation.

One of the most unique and out- standing cargo ships ever con- structed anywhere in the world and the largest break-bulk ship ever built by an American ship- yard was christened in mid-July at the Quincy Shipbuilding Division of General Dynamics. The 875-foot ship, the Doctor Lykes, first of a new merchant-ship class known as

SEABEEs, is one of three identical craft being built by General Dy- namics for Lykes Bros. Steamship

Lykes Bros, chairman, sponsored the Doctor Lykes by breaking the traditional bottle of champagne across the bow of the 51,000-ton displacement ship just before the vessel was floated out of the build- ing dock.

Secretary of Commerce for Mari- time Affairs and principal speaker at the ceremonies, said that the

Doctor Lykes "in every way sym- bolizes our resurging merchant marine. It will make its full con- tribution to the seapower so vital to our nation's welfare." "The flexibility of the SEABEE design is such," Mr. Gibson noted, "that with no structural modifica- tions the ships can be quickly adapted into full or partial contain- erships or roll-on/roll-off vehicle carriers. This vessel, along with her sisterships, will provide this nation with a military sealift capa- bility in time of emergency that is unmatched by any other class of commercial cargo ships or com- parable military vessel yet de- signed."