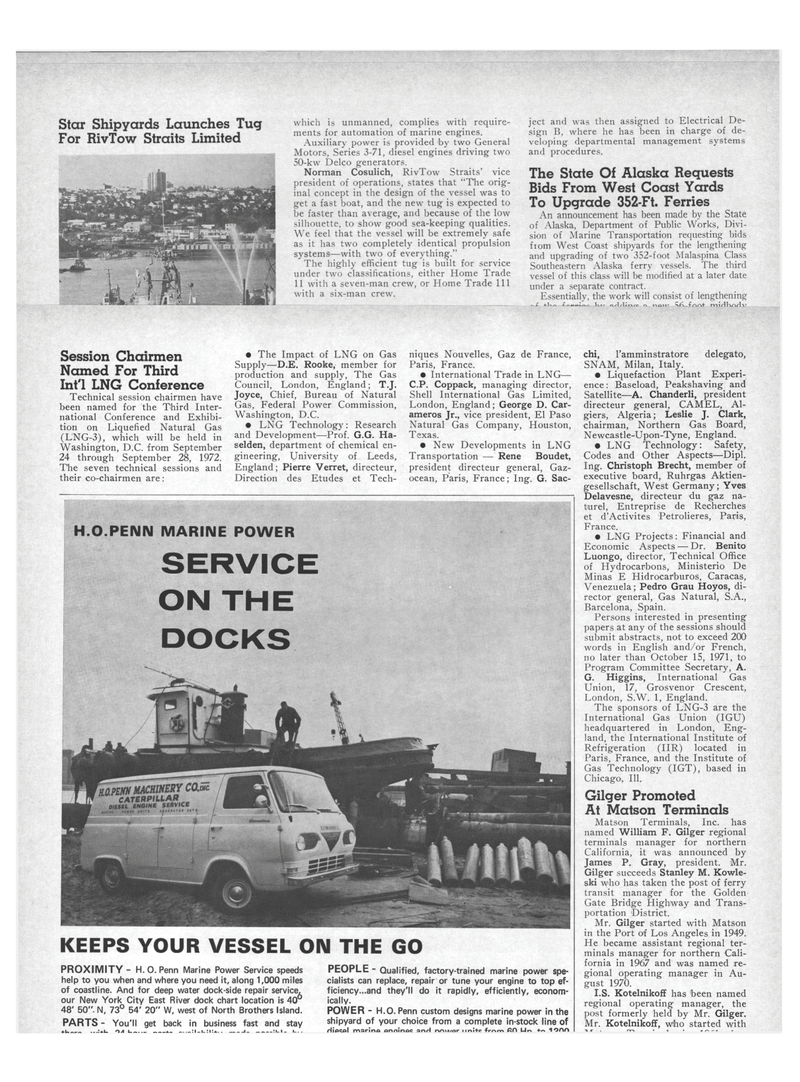 For RivTow Straits Limited which is unmanned, complies with require- ments for automation of marine engines.

Norman Cosulich, RivTow Straits' vice president of operations, states that "The orig- inal concept in the design of the vessel was to get a fast boat, and the new tug is expected to be faster than average, and because of the low silhouette, to show good sea-keeping qualities.

We feel that the vessel will be extremely safe as it has two completely identical propulsion systems—with two of everything."

The highly efficient tug is built for service under two classifications, either Home Trade 11 with a seven-man crew, or Home Trade 111 with a six-man crew. ject and was then assigned to Electrical De- sign B, where he has been in charge of de- veloping departmental management systems and procedures.

The State Of Alaska Requests

An announcement has been made by the State of Alaska, Department of Public Works, Divi- sion of Marine Transportation requesting bids ftom West Coast shipyards for the lengthening and upgrading of two 352-foot Malaspina Class

Southeastern Alaska ferry vessels. The third vessel of this class will be modified at a later date under a separate contract.

Essentially, the work will consist of lengthening

Technical session chairmen have been named for the Third Inter- national Conference and Exhibi- tion on Liquefied Natural Gas (LNG-3), which will be held in

The seven technical sessions and their co-chairmen are: • The Impact of LNG on Gas

Supply—D.E. Rooke, member for production and supply, The Gas

Persons interested in presenting papers at any of the sessions should submit abstracts, not to exceed 200 words in English and/or French, no later than October 15, 1971, to

The sponsors of LNG-3 are the

Paris, France, and the Institute of

Gas Technology (IGT), based in

California, it was announced by

Gilger succeeds Stanley M. Kowle- ski who has taken the post of ferry transit manager for the Golden

Mr. Gilger started with Matson in the Port of Los Angeles in 1949.

He became assistant regional ter- minals manager for northern Cali- fornia in 1967 and was named re- gional operating manager in Au- gust 1970.

Mr. Kotelnikoff, who started with

KEEPS YOUR VESSEL ON THE GO

POWER - H.O. Penn custom designs marine power in the shipyard of your choice from a complete in-stock line of