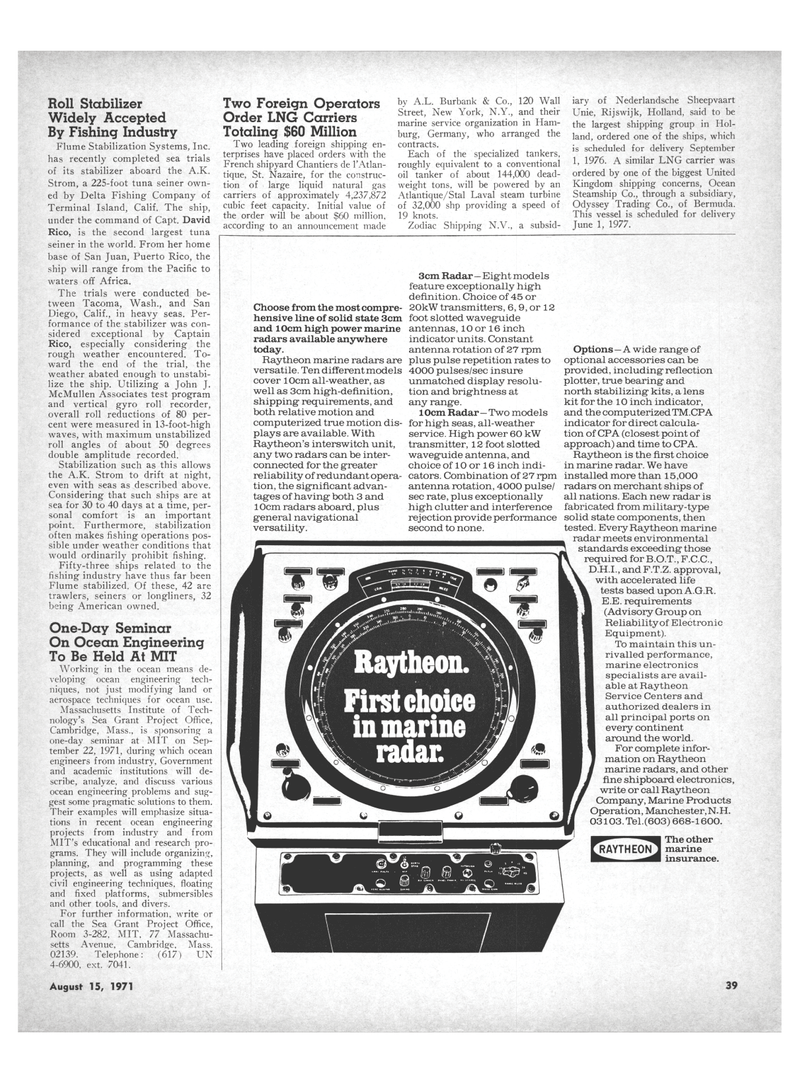 Flume Stabilization Systems, Inc. has recently completed sea trials of its stabilizer aboard the A.K.

Strom, a 225-foot tuna seiner own- ed by Delta Fishing Company of

Terminal Island, Calif. The ship, under the command of Capt. David

Rico, is the second largest tuna seiner in the world. From her home base of San Juan, Puerto Rico, the ship will range from the Pacific to waters off Africa.

The trials were conducted be- tween Tacoma, Wash., and San

Diego, Calif., in heavy seas. Per- formance of the stabilizer was con- sidered exceptional by Captain

Rico, especially considering the rough weather encountered. To- ward the end of the trial, the weather abated enough to unstabi- lize the ship. Utilizing a John J.

Stabilization such as this allows the A.K. Strom to drift at night, even with seas as described above.

Considering that such ships are at sea for 30 to 40 days at a time, per- sonal comfort is an important point. Furthermore, stabilization often makes fishing operations pos- sible under weather conditions that would ordinarily prohibit fishing.

Flume stabilized. Of these, 42 are trawlers, seiners or longliners, 32 being American owned.

To Be Held At MIT

Cambridge, Mass., is sponsoring a one-day seminar at MIT on Sep- tember 22, 1971, during which ocean engineers from industry, Government and academic institutions will de- scribe, analyze, and discuss various ocean engineering problems and sug- gest some pragmatic solutions to them.

MIT's educational and research pro- grams. They will include organizing, planning, and programming these projects, as well as using adapted civil engineering techniques, floating and fixed platforms, submersibles and other tools, and divers.

French shipyard Chantiers de l'Atlan- tique, St. Nazaire, for the construc- tion of large liquid natural gas carriers of approximately 4,237,872 cubic feet capacity. Initial value of the order will be about $60 million, according to an announcement made by A.L. Burbank & Co., 120 Wall

Each of the specialized tankers, roughly equivalent to a conventional oil tanker of about 144,000 dead- weight tons, will be powered by an

Unie, Rijswijk, Holland, said to be the largest shipping group in Hol- land, ordered one of the ships, which is scheduled for delivery September 1, 1976. A similar LNG carrier was ordered by one of the biggest United

Steamship Co., through a subsidiary,

This vessel is scheduled for delivery

Options — A wide range of optional accessories can be provided, including reflection plotter, true bearing and north stabilizing kits, a lens kit for the 10 inch indicator, and the computerized TM.CPA indicator for direct calcula- tion of CPA (closest point of approach) and time to CPA.

Raytheon is the first choice in marine radar. We have installed more than 15,000 radars on merchant ships of all nations. Each new radar is fabricated from military-type solid state components, then tested. Every Raytheon marine , radar meets environmental standards exceeding those required for B.O.T.,F.C.C.,

Service Centers and authorized dealers in all principal ports on every continent around the world.

The other marine insurance.