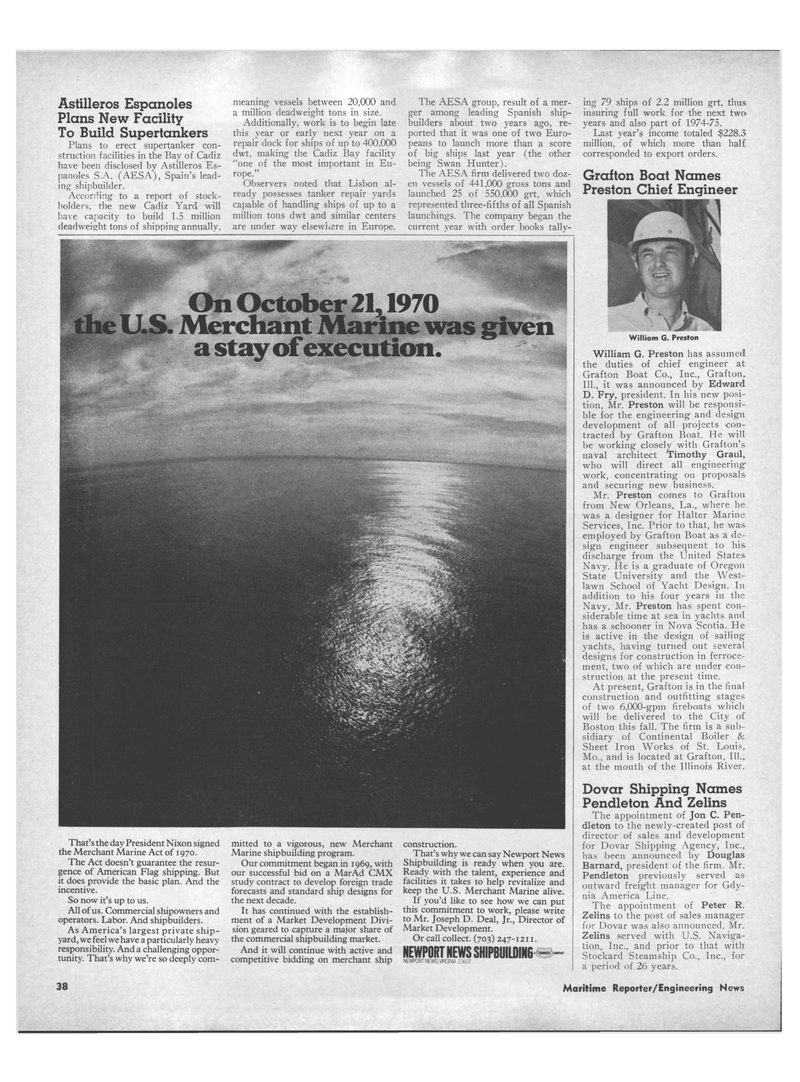 According to a report of stock- holders. the new Cadiz Yard will have capacity to build 1.5 million deadweight tons of shipping annually.

The Act doesn't guarantee the resur- gence of American Flag shipping. But it does provide the basic plan. And the incentive.

All of us. Commercial shipowners and operators. Labor. And shipbuilders.

As America's largest private ship- yard, we feel we have a particularly heavy responsibility. And a challenging oppor- tunity. That's why we're so deeply com- meaning vessels between 20,000 and a million deadweight tons in size.

Additionally, work is to begin late this year or early next year on a repair dock for ships of up to 400,000 dwt, making the Cadiz Bay facility "one of the most important in Eu- rope."

Observers noted that Lisbon al- ready possesses tanker repair yards capable of handling ships of up to a million tons dwt and similar centers are under way elsewhere in Europe. mitted to a vigorous, new Merchant

Our commitment began in 1969, with our successful bid on a MarAd CMX study contract to develop foreign trade forecasts and standard ship designs for the next decade.

It has continued with the establish- ment of a Market Development Divi- sion geared to capture a major share of the commercial shipbuilding market.

The AESA group, result of a mer- ger among leading Spanish ship- builders about two years ago, re- ported that it was one of two Euro- peans to launch more than a score of big ships last year (the other being Swan Hunter).

The AESA firm delivered two doz- en vessels of 441,000 gross tons and launched 25 of 550,000 grt, which represented three-fifths of all Spanish launchings. The company began the current year with order books tally- construction.

That's why we can say Newport News

Shipbuilding is ready when you are.

Ready with the talent, experience and facilities it takes to help revitalize and keep the U.S. Merchant Marine alive.

If you'd like to see how we can put this commitment to work, please write to Mr. Joseph D. Deal, Jr., Director of

Last year's income totaled $228.3 million, of which more than half corresponded to export orders.

William G. Preston has assumed the duties of chief engineer at

D. Fry, president. In his new posi- tion, Mr. Preston will be responsi- ble for the engineering and design development of all projects con- tracted by Grafton Boat. He will be working closely with Grafton's naval architect Timothy Graul, who will direct all engineering work, concentrating on proposals and securing new business.

Mr. Preston comes to Grafton from New Orleans, La., where he was a designer for Halter Marine

Services, Inc. Prior to that, he was employed by Grafton Boat as a de- sign engineer subsequent to his discharge from the United States

Navy. He is a graduate of Oregon

State University and the West- lawn School of Yacht Design. In addition to his four years in the

Navy, Mr. Preston has spent con- siderable time at sea in yachts and has a schooner in Nova Scotia. He is active in the design of sailing- yachts, having turned out several designs for construction in ferroce- ment, two of which are under con- struction at the present time.

At present, Grafton is in the final construction and outfitting stages of two 6,000-gpm fireboats which will be delivered to the City of

Boston this fall. The firm is a sub- sidiary of Continental Boiler &

The appointment of Jon C. Pen- dleton to the newly-created post of director of sales and development for Dovar Shipping Agency, Inc., has been announced by Douglas

Barnard, president of the firm. Mr.

The appointment of Peter R.

Zelins to the post of sales manager for Dovar was also announced. Mr.

Zelins served with U.S. Naviga- tion, Inc., and prior to that with

Stockard Steamship Co., Inc., for a period of 26 years.

On October 21,1970 . Merchant Marine was given a stay of execution. 38 Maritime Reporter/Engineering News