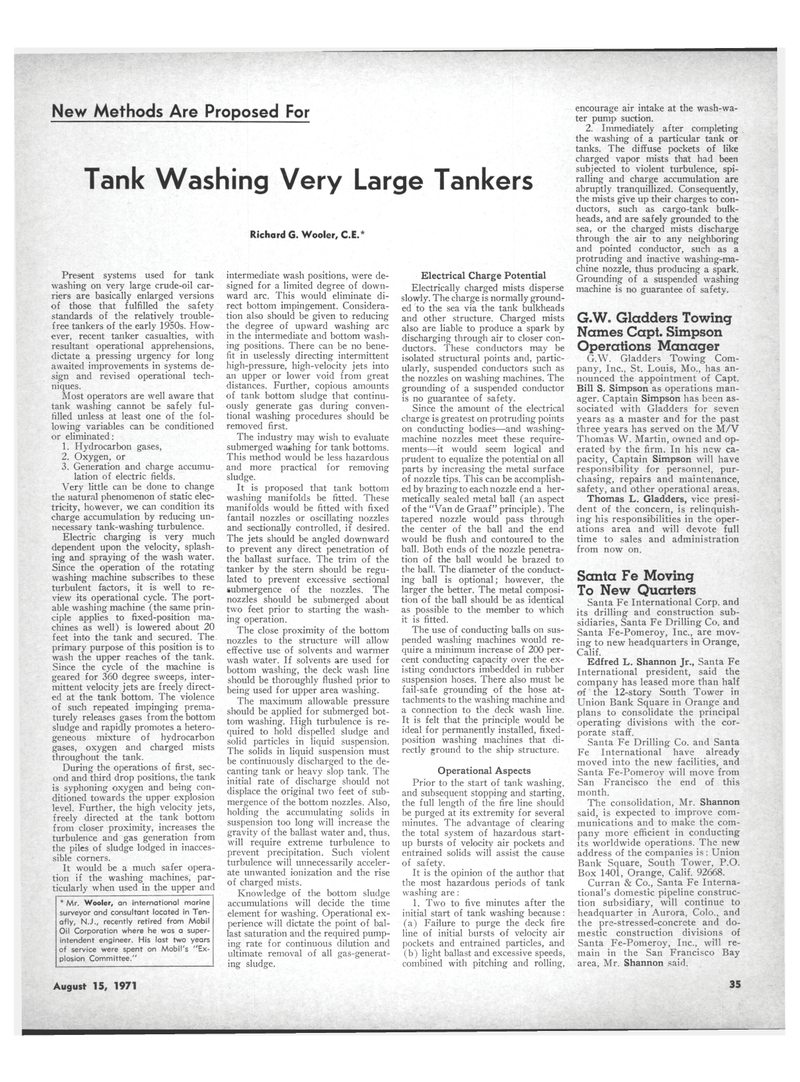 New Methods Are Proposed For

Present systems used for tank washing on very large crude-oil car- riers are basically enlarged versions of those that fulfilled the safety standards of the relatively trouble- free tankers of the early 1950s. How- ever, recent tanker casualties, with resultant operational apprehensions, dictate a pressing urgency for long awaited improvements in systems de- sign and revised operational tech- niques.

Most operators are well aware that tank washing cannot be safely ful- filled unless at least one of the fol- lowing variables can be conditioned or eliminated: 1. Hydrocarbon gases, 2. Oxygen, or 3. Generation and charge accumu- lation of electric fields.

Very little can be done to change the natural phenomenon of static elec- tricity, however, we can condition its charge accumulation by reducing un- necessary tank-washing turbulence.

Electric charging is very much dependent upon the velocity, splash- ing and spraying of the wash water.

Since the operation of the rotating washing machine subscribes to these turbulent factors, it is well to re- view its operational cycle. The port- able washing machine (the same prin- ciple applies to fixed-position ma- chines as well) is lowered about 20 feet into the tank and secured. The primary purpose of this position is to wash the upper reaches of the tank.

Since the cycle of the machine is geared for 360 degree sweeps, inter- mittent velocity jets are freely direct- ed at the tank bottom. The violence of such repeated impinging prema- turely releases gases from the bottom sludge and rapidly promotes a hetero- geneous mixture of hydrocarbon gases, oxygen and charged mists throughout the tank.

During the operations of first, sec- ond and third drop positions, the tank is syphoning oxygen and being con- ditioned towards the upper explosion level. Further, the high velocity jets, freely directed at the tank bottom from closer proximity, increases the turbulence and gas generation from the piles of sludge lodged in inacces- sible corners.

It would be a much safer opera- tion if the washing machines, par- ticularly when used in the upper and * Mr. Wooler, an international marine surveyor and consultant located in Ten- afly, N.J., recently retired from Mobil

Oil Corporation where he was a super- intendent engineer. His last two years of service were spent on Mobil's "Ex- plosion Committee."

Richard G. Wooler, C.E.* intermediate wash positions, were de- signed for a limited degree of down- ward arc. This would eliminate di- rect bottom impingement. Considera- tion also should be given to reducing the degree of upward washing arc in the intermediate and bottom wash- ing positions. There can be no bene- fit in uselessly directing intermittent high-pressure, high-velocity jets into an upper or lower void from great distances. Further, copious amounts of tank bottom sludge that continu- ously generate gas during conven- tional washing procedures should be removed first.

The industry may wish to evaluate submerged washing for tank bottoms.

This method would be less hazardous and more practical for removing sludge.

It is proposed that tank bottom washing manifolds be fitted. These manifolds would be fitted with fixed fantail nozzles or oscillating nozzles and sectionaljy controlled, if desired.

The jets should be angled downward to prevent any direct penetration of the ballast surface. The trim of the tanker by the stern should be regu- lated to prevent excessive sectional submergence of the nozzles. The nozzles should be submerged about two feet prior to starting the wash- ing operation.

The close proximity of the bottom nozzles to the structure will allow effective use of solvents and warmer wash water. If solvents are used for bottom washing, the deck wash line should be thoroughly flushed prior to being used for upper area washing.

The maximum allowable pressure should be applied for submerged bot- tom washing. High turbulence is re- quired to hold dispelled sludge and solid particles in liquid suspension.

The solids in liquid suspension must be continuously discharged to the de- canting tank or heavy slop tank. The initial rate of discharge should not displace the original two feet of sub- mergence of the bottom nozzles. Also, holding the accumulating solids in suspension too long will increase the gravity of the ballast water and, thus, will require extreme turbulence to prevent precipitation. Such violent turbulence will unnecessarily acceler- ate unwanted ionization and the rise of charged mists.

Knowledge of the bottom sludge accumulations will decide the time element for washing. Operational ex- perience will dictate the point of bal- last saturation and the required pump- ing rate for continuous dilution and ultimate removal of all gas-generat- ing sludge.

Electrically charged mists disperse slowly. The charge is normally ground- ed to the sea via the tank bulkheads and other structure. Charged mists also are liable to produce a spark by discharging through air to closer con- ductors. These conductors may be isolated structural points and, partic- ularly, suspended conductors such as the nozzles on washing machines. The grounding of a suspended conductor is no guarantee of safety.

Since the amount of the electrical charge is greatest on protruding points on conducting bodies—and washing- machine nozzles meet these require- ments—it would seem logical and prudent to equalize the potential on all parts by increasing the metal surface of nozzle tips. This can be accomplish- ed by brazing to each nozzle end a her- metically sealed metal ball (an aspect of the "Van de Graaf" principle). The tapered nozzle would pass through the center of the ball and the end would be flush and contoured to the ball. Both ends of the nozzle penetra- tion of the ball would be brazed to the ball. The diameter of the conduct- ing ball is optional; however, the larger the better. The metal composi- tion of the ball should be as identical as possible to the member to which it is fitted.

The use of conducting balls on sus- pended washing machines would re- quire a minimum increase of 200 per- cent conducting capacity over the ex- isting conductors imbedded in rubber suspension hoses. There also must be fail-safe grounding of the hose at- tachments to the washing machine and a connection to the deck wash line.

It is felt that the principle would be ideal for permanently installed, fixed- position washing machines that di- rectly ground to the ship structure.

Prior to the start of tank washing, and subsequent stopping and starting, the full length of the fire line should be purged at its extremity for several minutes. The advantage of clearing the total system of hazardous start- up bursts of velocity air pockets and entrained solids will assist the cause of safety.

It is the opinion of the author that the most hazardous periods of tank washing are: 1. Two to five minutes after the initial start of tank washing because: (a) Failure to purge the deck fire line of initial bursts of velocity air pockets and entrained particles, and (b) light ballast and excessive speeds, combined with pitching and rolling, encourage air intake at the wash-wa- ter pump suction. 2. Immediately after completing the washing of a particular tank or tanks. The diffuse pockets of like charged vapor mists that had been subjected to violent turbulence, spi- ralling and charge accumulation are abruptly tranquillized. Consequently, the mists give up their charges to con- ductors, such as cargo-tank bulk- heads, and are safely grounded to the sea, or the charged mists discharge through the air to any neighboring and pointed conductor, such as a protruding and inactive washing-ma- chine nozzle, thus producing a spark.

Grounding of a suspended washing machine is no guarantee of safety.

Bill S. Simpson as operations man- ager. Captain Simpson has been as- sociated with Gladders for seven years as a master and for the past t'hree years has served on the M/V

Thomas W. Martin, owned and op- erated by the firm. In his new ca- pacity, Captain Simpson will have responsibility for personnel, pur- chasing, repairs and maintenance, safety, and other operational areas.

Thomas L. Gladders, vice presi- dent of the concern, is relinquish- ing his responsibilities in the oper- ations area and will devote full time to sales and administration from now on.

International president, said the company has leased more than half of the 12-story South Tower in

Union Bank Square in Orange and plans to consolidate the principal operating divisions with the cor- porate staff.

Fe International have already moved into the new facilities, and

Santa Fe-Pomeroy will move from

San Francisco the end of this month.

The consolidation, Mr. Shannon said, is expected to improve com- munications and to make the com- pany more efficient in conducting its worldwide operations. The new address of the companies is : Union