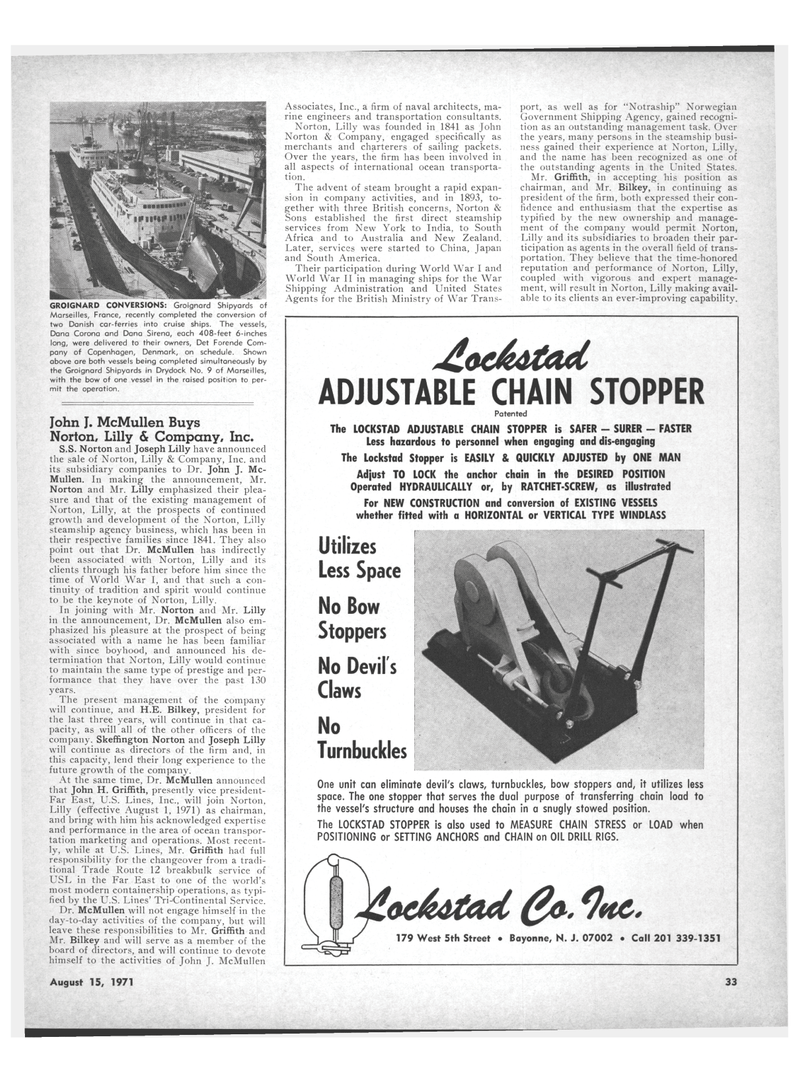 Dana Corona and Dana Sirena, each 408-feet 6-inches long, were delivered to their owners, Det Forende Com- pany of Copenhagen, Denmark, on schedule. Shown above are both vessels being completed simultaneously by the Groignard Shipyards in Drydock No. 9 of Marseilles, with the bow of one vessel in the raised position to per- mit the operation.

S.S. Norton and Joseph Lilly have announced the sale of Norton, Lilly & Company, Inc. and its subsidiary companies to Dr. John J. Mc-

Mullen. In making the announcement, Mr.

Norton and Mr. Lilly emphasized their plea- sure and that of the existing management of

Norton, Lilly, at the prospects of continued growth and development of the Norton, Lilly steamship agency business, which has been in their respective families since 1841. They also point out that Dr. McMullen has indirectly been associated with Norton, Lilly and its clients through his father before him since the time of World War I, and that such a con- tinuity of tradition and spirit would continue to be the keynote of Norton, Lilly.

In joining with Mr. Norton and Mr. Lilly in the announcement, Dr. McMullen also em- phasized his pleasure at the prospect of being associated with a name he has been familiar with since boyhood, and announced his de- termination that Norton, Lilly would continue to maintain the same type of prestige and per- formance that they have over the past 130 years.

Lilly (effective August 1, 1971) as chairman, and bring with him his acknowledged expertise and performance in the area of ocean transpor- tation marketing and operations. Most recent- ly, while at U.S. Lines, Mr. Griffith had full responsibility for the changeover from a tradi- tional Trade Route 12 breakbulk service of

USL in the Far East to one of the world's most modern containership operations, as typi- fied by the U.S. Lines' Tri-Continental Service.

Dr. McMullen will not engage himself in the day-to-day activities of the company, but will leave these responsibilities to Mr. Griffith and

Mr. Bilkey and will serve as a member of the board of directors, and will continue to devote himself to the activities of John J. McMullen

Norton, Lilly was founded in 1841 as John

Over the years, the firm has been involved in all aspects of international ocean transporta- tion.

The advent of steam brought a rapid expan- sion in company activities, and in 1893, to- gether with three British concerns, Norton &

Africa and to Australia and New Zealand.

Later, services were started to China, Japan and South America.

Their participation during World War I and

World War II in managing ships for the War

Agents for the British Ministry of War Trans- port, as well as for "Notraship" Norwegian

Government Shipping Agency, gained recogni- tion as an outstanding management task. Over the years, many persons in the steamship busi- ness gained their experience at Norton, Lilly, and the name has been recognized as one of the outstanding agents in the United States.

Mr. Griffith, in accepting his position as chairman, and Mr. Bilkey, in continuing as president of the firm, both expressed their con- fidence and enthusiasm that the expertise as typified by the new ownership and manage- ment of the company would permit Norton,

Lilly and its subsidiaries to broaden their par- ticipation as agents in the overall field of trans- portation. They believe that the time-honored reputation and performance of Norton, Lilly, coupled with vigorous and expert manage- ment, will result in Norton, Lilly making avail- able to its clients an ever-improving capability.

Less hazardous to personnel when engaging and dis-engaging

The Lockstad Stopper is EASILY & QUICKLY ADJUSTED by ONE MAN

Adjust TO LOCK the anchor chain in the DESIRED POSITION

Operated HYDRAULICALLY or, by RATCHET-SCREW, as illustrated

One unit can eliminate devil's claws, turnbuckles, bow stoppers and, it utilizes less space. The one stopper that serves the dual purpose of transferring chain load to the vessel's structure and houses the chain in a snugly stowed position.