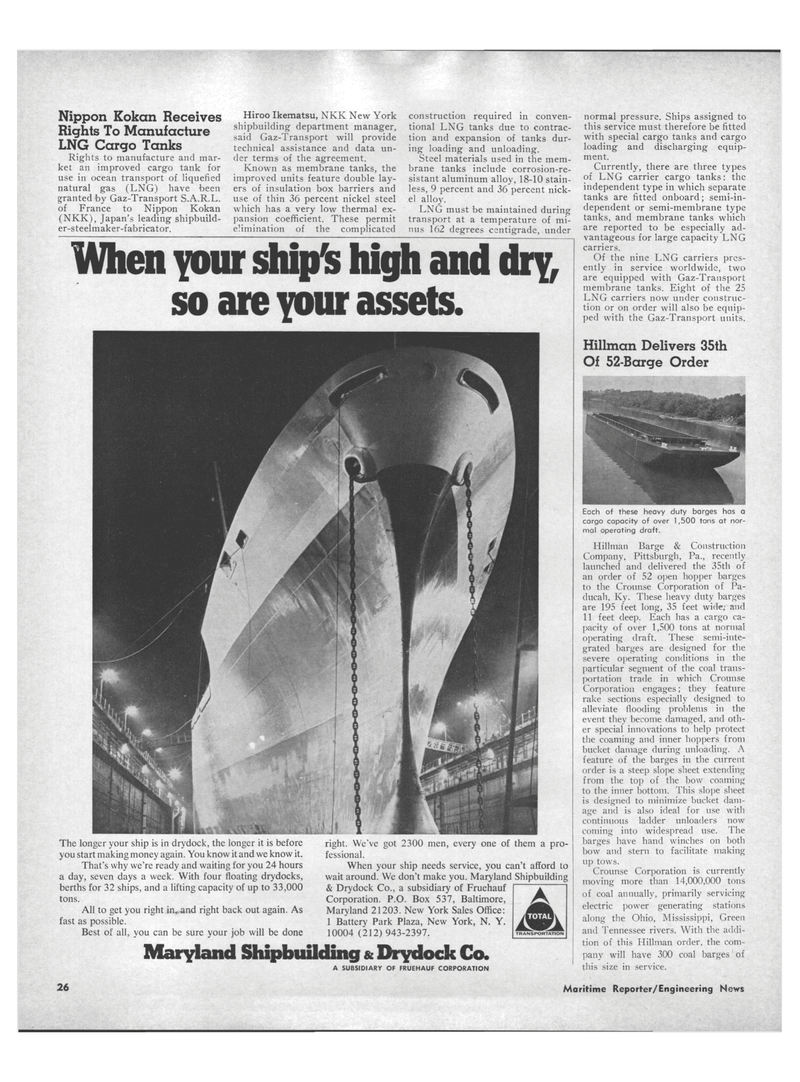 Rights to manufacture and mar- ket an improved cargo tank for use in ocean transport of liquefied natural gas (LNG) have been granted by Gaz-Transport S.A.R.L. of France to Nippon Kokan (NKK), Japan's leading shipbuild- er-steelmaker-fabricator.

Known as membrane tanks, the improved units feature double lay- ers of insulation box barriers and use of thin 36 percent nickel steel which has a very low thermal ex- pansion coefficient. These permit elimination of the complicated construction required in conven- tional LNG tanks due to contrac- tion and expansion of tanks dur- ing loading and unloading.

LNG must be maintained during transport at a temperature of mi- nus 162 degrees centigrade, under normal pressure. Ships assigned to this service must therefore be fitted with special cargo tanks and cargo loading and discharging equip- ment.

Currently, there are three types of LNG carrier cargo tanks: the independent type in which separate tanks are fitted onboard; semi-in- dependent or semi-membrane type tanks, and membrane tanks which are reported to be especially ad- vantageous for large capacity LNG carriers.

Of the nine LNG carriers pres- ently in service worldwide, two are equipped with Gaz-Transport membrane tanks. Eight of the 25

LNG carriers now under construc- tion or on order will also be equip- ped with the Gaz-Transport units.

When pr ship's high and dry, so are your assets.

The longer your ship is in drydock, the longer it is before you start making money again. You know it and we know it.

That's why we're ready and waiting for you 24 hours a day, seven days a week. With four floating drydocks, berths for 32 ships, and a lifting capacity of up to 33,000 tons.

All to get you right in,-and right back out again. As fast as possible.

Best of all, you can be sure your job will be done right. We've got 2300 men, every one of them a pro- fessional.

When your ship needs service, you can't afford to wait around. We don't make you. Maryland Shipbuilding & Drydock Co., a subsidiary of Fruehauf

A SUBSIDIARY OF FRUEHAUF CORPORATION

Each of these heavy duty barges has a cargo capacity of over 1,500 tons at nor- mal operating draft. 26 Maritime Reporter/Engineering News

Company, Pittsburgh, Pa., recently launched and delivered the 35th of an order of 52 open hopper barges to the Crounse Corporation of Pa- ducah, Ky. These heavy duty barges are 195 feet long, 35 feet wide; and 11 feet deep. Each has a cargo ca- pacity of over 1,500 tons at normal operating draft. These semi-inte- grated barges are designed for the severe operating conditions in the particular segment of the coal trans- portation trade in which Crounse

Corporation engages; they feature rake sections especially designed to alleviate flooding problems in the event they become damaged, and oth- er special innovations to help protect the coaming and inner hoppers from bucket damage during unloading. A feature of the barges in the current order is a steep slope sheet extending from the top of the bow coaming to the inner bottom. This slope sheet is designed to minimize bucket dam- age and is also ideal for use with continuous ladder unloaders now coming into widespread use. The barges have hand winches on both bow and stern to facilitate making up tows.

Crounse Corporation is currently moving more than 14,000,000 tons of coal annually, primarily servicing electric power generating stations along the Ohio, Mississippi, Green and Tennessee rivers. With the addi- tion of this Hillman order, the com- pany will have 300 coal barges of this size in service.