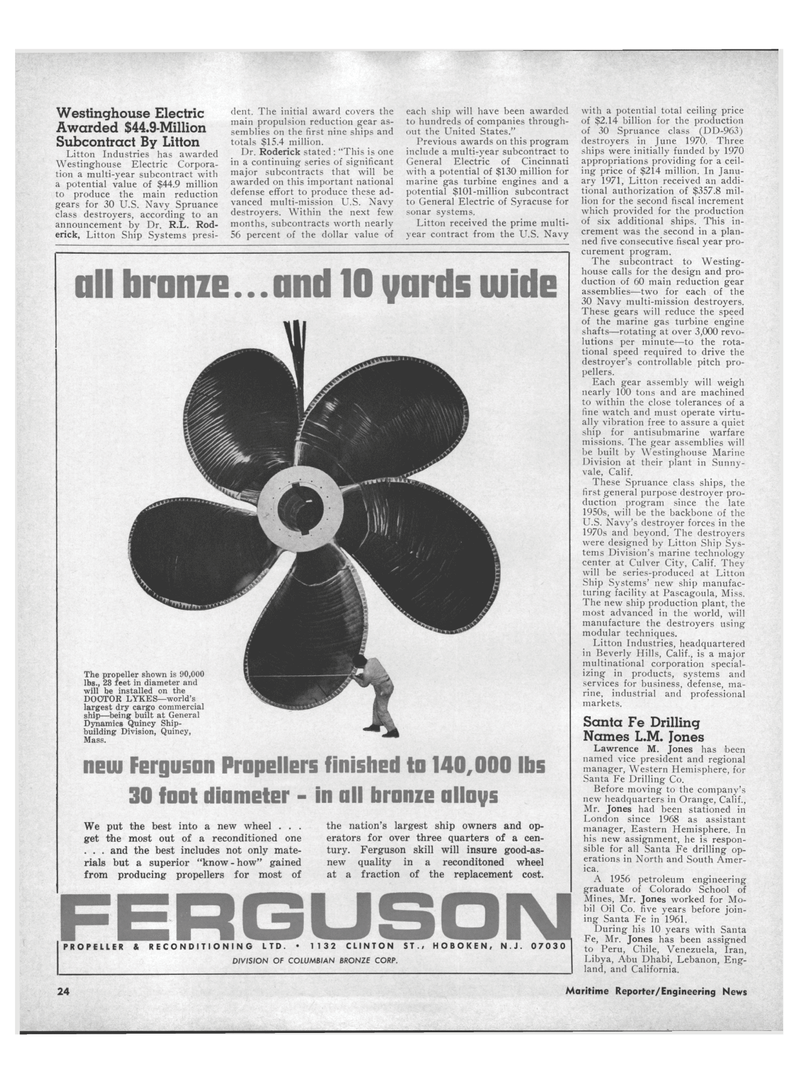 Dr. Roderick stated : "This is one in a continuing series of significant major subcontracts that will be awarded on this important national defense effort to produce these ad- vanced multi-mission U.S. Navy destroyers. Within the next few months, subcontracts worth nearly 56 percent of the dollar value of each ship will have been awarded to hundreds of companies through- out the United States."

Previous awards on this program include a multi-year subcontract to

Litton received the prime multi- year contract from the U.S. Navy with a potential total ceiling price of $2.14 billion for the production of 30 Spruance class (DD-963) destroyers in June 1970. Three ships were initially funded by 1970 appropriations providing for a ceil- ing price of $214 million. In Janu- ary 1971, Litton received an addi- tional authorization of $357.8 mil- lion for the second fiscal increment which provided for the production of six additional ships. This in- crement was the second in a plan- ned five consecutive fiscal year pro- curement program.

The subcontract to Westing- house calls for the design and pro- duction of 60 main reduction gear assemblies—two for each of the 30 Navy multi-mission destroyers.

These gears will reduce the speed of the marine gas turbine engine shafts—rotating at over 3,000 revo- lutions per minute—to the rota- tional speed required to drive the destroyer's controllable pitch pro- pellers.

Each gear assembly will weigh nearly 100 tons and are machined to within the close tolerances of a fine watch and must operate virtu- ally vibration free to assure a quiet ship for antisubmarine warfare missions. The gear assemblies will be built by Westinghouse Marine

Division at their plant in Sunny- vale, Calif.

These Spruance class ships, the first general purpose destroyer pro- duction program since the late 1950s, will be the backbone of the

U.S. Navy's destroyer forces in the 1970s and beyond. The destroyers were designed by Litton Ship Sys- tems Division's marine technology center at Culver City, Calif. They will be series-produced at Litton

The new ship production plant, the most advanced in the world, will manufacture the destroyers using modular techniques.

Before moving to the company's new headquarters in Orange, Calif.,

Mr. Jones had been stationed in

London since 1968 as assistant manager, Eastern Hemisphere. In his new assignment, he is respon- sible for all Santa Fe drilling op- erations in North and South Amer- ica.

A 1956 petroleum engineering graduate of Colorado School of

During his 10 years with Santa

We put the best into a new wheel . . . get the most out of a reconditioned one . . . and the best includes not only mate- rials but a superior "know-how" gained from producing propellers for most of the nation's largest ship owners and op- erators for over three quarters of a cen- tury. Ferguson skill will insure good-as- new quality in a reconditoned wheel at a fraction of the replacement cost.

The propeller shown is 90,000 lbs., 28 feet in diameter and will be installed on the