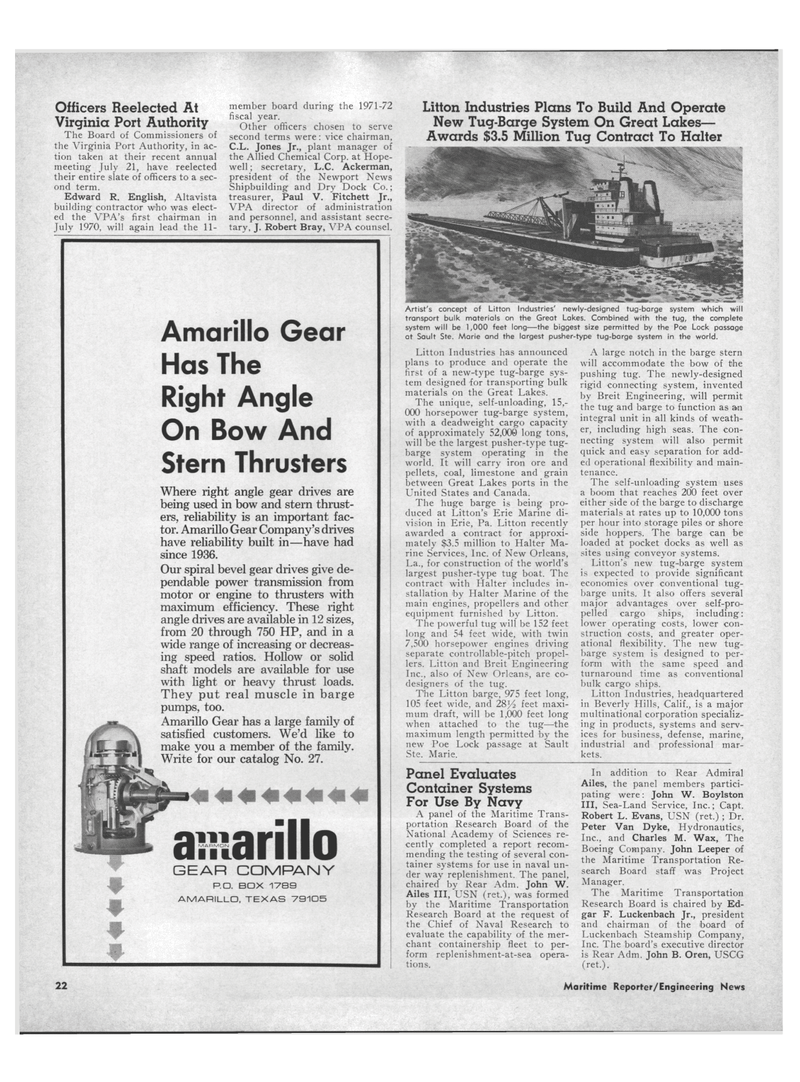 The Board of Commissioners of the Virginia Port Authority, in ac- tion taken at their recent annual meeting July 21, have reelected their entire slate of officers to a sec- ond term.

Other officers chosen to serve second terms were: vice chairman,

Where right angle gear drives are being used in bow and stern thrust- ers, reliability is an important fac- tor. Amarillo Gear Company's drives have reliability built in—have had since 1936.

Our spiral bevel gear drives give de- pendable power transmission from motor or engine to thrusters with maximum efficiency. These right angle drives are available in 12 sizes, from 20 through 750 HP, and in a wide range of increasing or decreas- ing speed ratios. Hollow or solid shaft models are available for use with light or heavy thrust loads.

They put real muscle in barge pumps, too.

Amarillo Gear has a large family of satisfied customers. We'd like to make you a member of the family.

Write for our catalog No. 27. * amarillo

Artist's concept of Litton Industries' newly-designed tug-barge system which will transport bulk materials on the Great Lakes. Combined with the tug, the complete system will be 1,000 feet long—the biggest size permitted by the Poe Lock passage at Sault Ste. Marie and the largest pusher-type tug-barge system in the world.

Litton Industries has announced plans to produce and operate the first of a new-type tug-barge sys- tem designed for transporting bulk materials on the Great Lakes.

The unique, self-unloading, 15,- 000 horsepower tug-barge system, with a deadweight cargo capacity of approximately 52,000 long tons, will be the largest pusher-type tug- barge system operating in the world. It will carry iron ore and pellets, coal, limestone and grain between Great Lakes ports in the

La., for construction of the world's largest pusher-type tug boat. The contract with Halter includes in- stallation by Halter Marine of the main engines, propellers and other equipment furnished by Litton.

Inc., also of New Orleans, are co- designers of the tug.

The Litton barge, 975 feet long, 105 feet wide, and 28*4 feet maxi- mum draft, will be 1,000 feet long when attached to the tug—the maximum length permitted by the new Poe Lock passage at Sault

A large notch in the barge stern will accommodate the bow of the pushing tug. The newly-designed rigid connecting system, invented by Breit Engineering, will permit the tug and barge to function as a»n integral unit in all kinds of weath- er, including high seas. The con- necting system will also permit quick and easy separation for add- ed operational flexibility and main- tenance.

The self-unloading system uses a boom that reaches 200 feet over either side of the barge to discharge materials at rates up to 10,000 tons per hour into storage piles or shore side hoppers. The barge can be loaded at pocket docks as well as sites using conveyor systems.

For Use By Navy

A panel of the Maritime Trans- portation Research Board of the

Ailes III, USN (ret.), was formed by the Maritime Transportation

Research Board at the request of the Chief of Naval Research to evaluate the capability of the mer- chant containership fleet to per- form replenishment-at-sea opera- tions.

In addition to Rear Admiral

Boeing Company. John Leeper of the Maritime Transportation Re- search Board staff was Project

Research Board is chaired by Ed- gar F. Luckenbach Jr., president and chairman of the board of