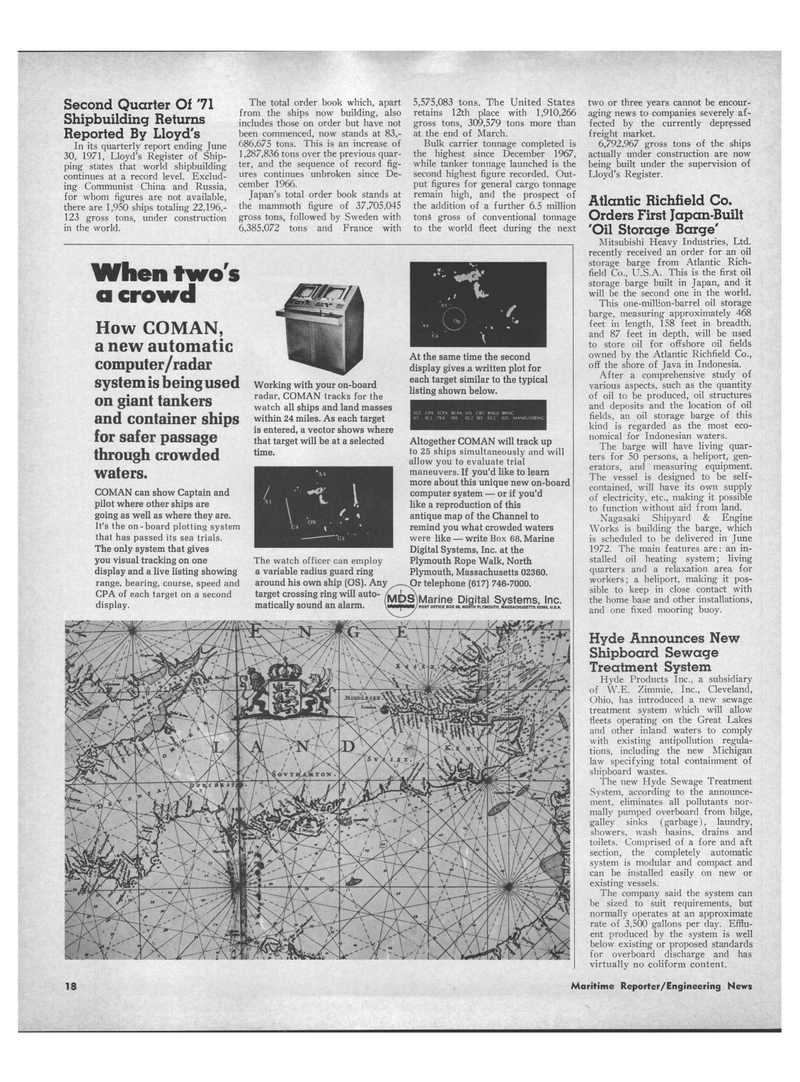 In its quarterly report ending June 30, 1971, Lloyd's Register of Ship- ping states that world shipbuilding continues at a record level. Exclud- ing Communist China and Russia, for whom figures are not available, there are 1,950 ships totaling 22,196,- 123 gross tons, under construction in the world.

The total order book which, apart from the ships now building, also includes those on order but have not been commenced, now stands at 83,- 686,675 tons. This is an increase of 1,287,836 tons over the previous quar- ter, and the sequence of record fig- ures continues unbroken since De- cember 1966.

Bulk carrier tonnage completed is the highest since December 1967, while tanker tonnage launched is the second highest figure recorded. Out- put figures for general cargo tonnage remain high, and the prospect of the addition of a further 6.5 million tons gross of conventional tonnage to the world fleet during the next two or three years cannot be encour- aging news to companies severely af- fected by the currently depressed freight market. 6,792,967 gross tons of the ships actually under construction are now being built under the supervision of

Mitsubishi Heavy Industries, Ltd. recently received an order for an oil storage barge from Atlantic Rich- field Co., U.S.A. This is the first oil storage barge built in Japan, and it will be the second one in the world.

This one-million-barrel oil storage barge, measuring approximately 468 feet in length, 158 feet in breadth, and 87 feet in depth, will be used to store oil for offshore oil fields owned by the Atlantic Richfield Co., off the shore of Java in Indonesia.

After a comprehensive study of various aspects, such as the quantity of oil to be produced, oil structures and deposits and the location of oil fields, an oil storage barge of this kind is regarded as the most eco- nomical for Indonesian waters.

The barge will have living quar- ters for 50 persons, a heliport, gen- erators, and measuring equipment.

The vessel is designed to be self- contained, will have its own supply of electricity, etc., making it possible to function without aid from land.

Works is building the barge, which is scheduled to be delivered in June 1972. The main features are: an in- stalled oil heating system; living quarters and a relaxation area for workers; a heliport, making it pos- sible to keep in close contact with the home base and other installations, and one fixed mooring buoy.

Ohio, has introduced a new sewage treatment system which will allow fleets operating on the Great Lakes and other inland waters to comply with existing antipollution regula- tions, including the new Michigan law specifying total containment of shipboard wastes.

System, according to the announce- ment, eliminates all pollutants nor- mally pumped overboard from bilge, galley sinks (garbage), laundry, showers, wash basins, drains and toilets. Comprised of a fore and aft section, the completely automatic system is modular and compact and can be installed easily on new or existing vessels.

The company said the system can be sized to suit requirements, but normally operates at an approximate rate of 3,500 gallons per day. Efflu- ent produced by the system is well below existing or proposed standards for overboard discharge and has virtually no coliform content.

When two's a crowd

How COMAN, a new automatic computer/ radar system is being used on giant tankers and container ships for safer passage through crowded waters.

COMAN can show Captain and pilot where other ships are going as well as where they are.

It's the on-board plotting system that has passed its sea trials.

The only system that gives you visual tracking on one display and a live listing showing range, bearing, course, speed and

CPA of each target on a second display.

Working with your on-board radar, COMAN tracks for the watch all ships and land masses within 24 miles. As each target is entered, a vector shows where that target will be at a selected time.

The watch officer can employ a variable radius guard ring around his own ship (OS). An; target crossing ring will auto- matically sound an alarm.

At the same time the second display gives .a written plot for each target similar to the typical listing shown below.

Altogether COMAN will track up to 25 ships simultaneously and will allow you to evaluate trial maneuvers. If you'd like to learn more about this unique new on-board computer system — or if you'd like a reproduction of this antique map of the Channel to remind you what crowded waters were like — write Box 68, Marine

Digital Systems, Inc. at the