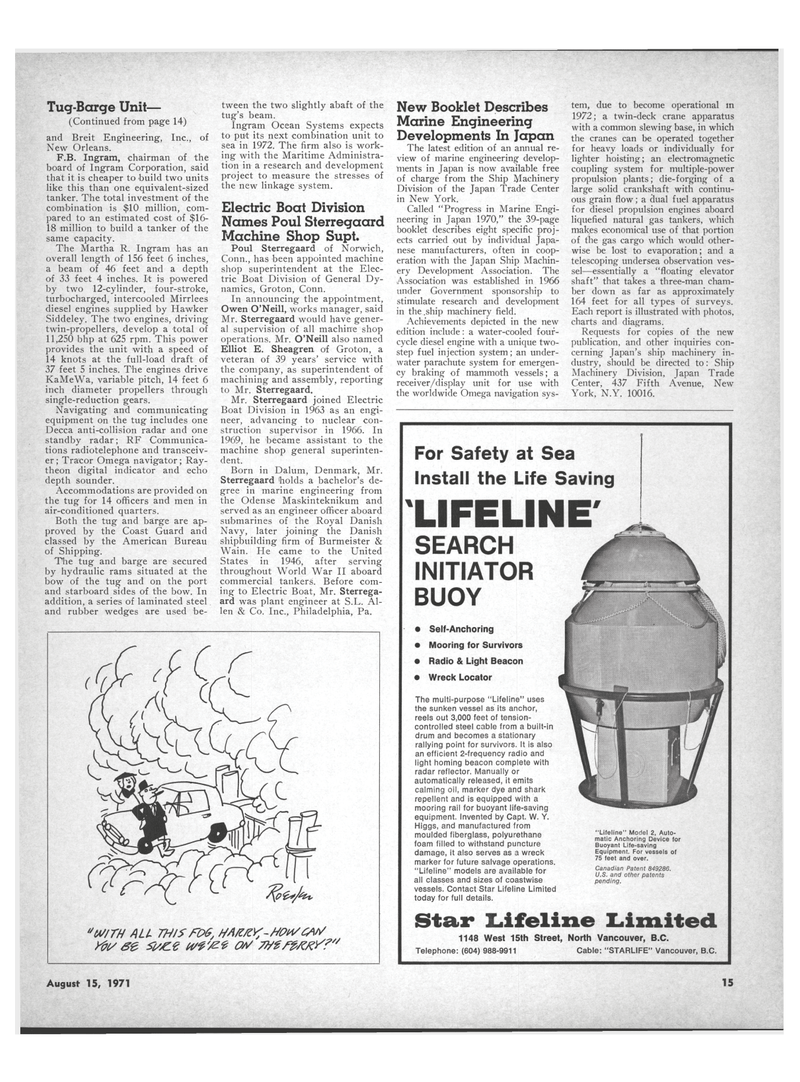 Tug-Barge Unit— (Continued from page 14) and Breit Engineering, Inc., of

F.B. Ingram, chairman of the board of Ingram Corporation, said that it is cheaper to build two units like this than one equivalent-sized tanker. The total investment of the combination is $10 million, com- pared to an estimated cost of $16- 18 million to build a tanker of the same capacity.

The Martha R. Ingram has an overall length of 156 feet 6 inches, a beam of 46 feet and a depth of 33 feet 4 inches. It is powered by two 12-cylinder, four-stroke, turbocharged, intercooled Mirrlees diesel engines supplied by Hawker

Siddeley. The two engines, driving twin-propellers, develop a total of 11,250 bhp at 625 rpm. This power provides the unit with a speed of 14 knots at the full-load draft of 37 feet 5 inches. The engines drive

Navigating and communicating equipment on the tug includes one

Accommodations are provided on the tug for 14 officers and men in air-conditioned quarters.

Both the tug and barge are ap- proved by the Coast Guard and classed by the American Bureau of Shipping.

The tug and barge are secured by hydraulic rams situated at the bow of the tug and on the port and starboard sides of the bow. In addition, a series of laminated steel and rubber wedges are used be- tween the two slightly abaft of the tug's beam.

Ingram Ocean Systems expects to put its next combination unit to sea in 1972. The firm also is work- ing with the Maritime Administra- tion in a research and development project to measure the stresses of the new linkage system.

In announcing the appointment,

Elliot E. Sheagren of Groton, a veteran of 39 years' service with the company, as superintendent of machining and assembly, reporting to Mr. Sterregaard.

Boat Division in 1963 as an engi- neer, advancing to nuclear con- struction supervisor in 1966. In 1969, he became assistant to the machine shop general superinten- dent.

Wain. He came to the United

Division of the Japan Trade Center in New York.

Association was established in 1966 under Government sponsorship to stimulate research and development in the .ship machinery field.

Achievements depicted in the new edition include: a water-cooled four- cycle diesel engine with a unique two- step fuel injection system; an under- water parachute system for emergen- cy braking of mammoth vessels; a receiver/display unit for use with the worldwide Omega navigation sys- tem, due to become operational in 1972; a twin-deck crane apparatus with a common slewing base, in which the cranes can be operated together for heavy loads or individually for lighter hoisting; an electromagnetic coupling system for multiple-power propulsion plants; die-forging of a large solid crankshaft with continu- ous grain flow; a dual fuel apparatus for diesel propulsion engines aboard liquefied natural gas tankers, which makes economical use of that portion of the gas cargo which would other- wise be lost to evaporation; and a telescoping undersea observation ves- sel—essentially a "floating elevator shaft" that takes a three-man cham- ber down as far as approximately 164 feet for all types of surveys.

Each report is illustrated with photos, charts and diagrams.

Requests for copies of the new publication, and other inquiries con- cerning Japan's ship machinery in- dustry, should be directed to: Ship

For Safety at Sea

The multi-purpose "Lifeline" uses the sunken vessel as its anchor, reels out 3,000 feet of tension- controlled steel cable from a built-in drum and becomes a stationary rallying point for survivors. It is also an efficient 2-frequency radio and light homing beacon complete with radar reflector. Manually or automatically released, it emits calming oil, marker dye and shark repellent and is equipped with a mooring rail for buoyant life-saving equipment. Invented by Capt. W. Y.

Equipment. For vessels of 75 feet and over.

U.S. and other patents pending.