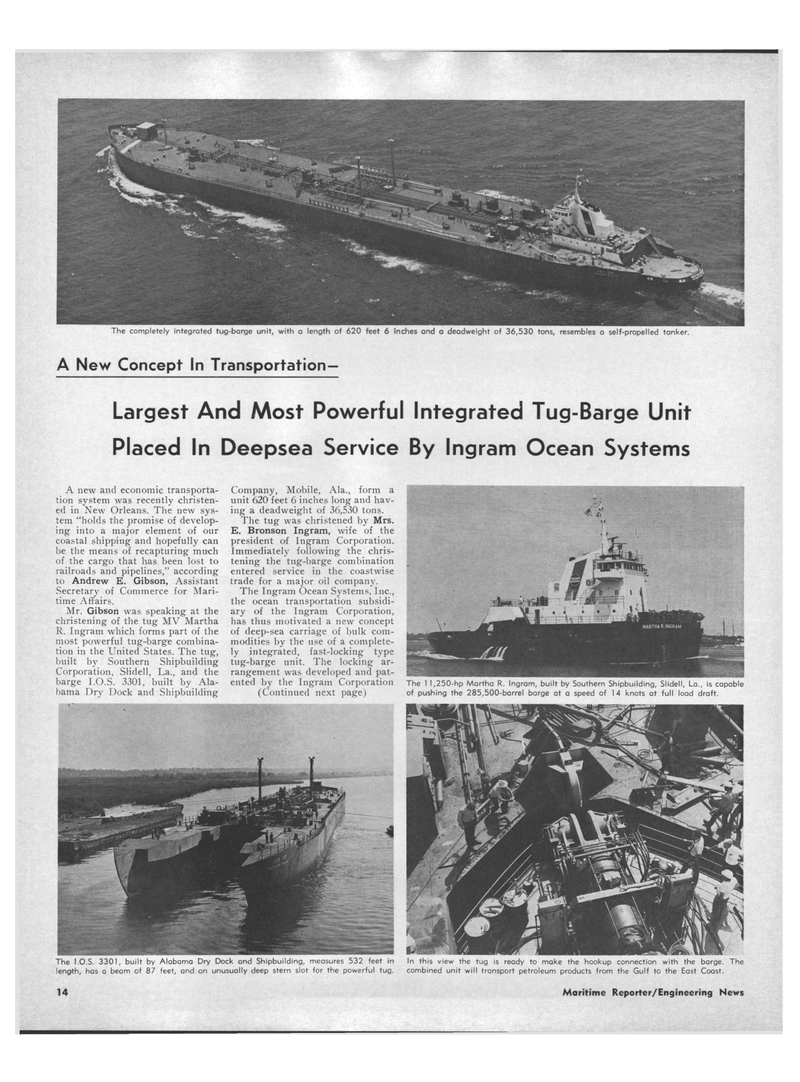 The completely integrated tug-barge unit, with a length of 620 feet 6 inches and a deadweight of 36,530 tons, resembles a self-propelled tanker.

A New Concept In Transportation-

The I.O.S. 3301, built by Alabama Dry Dock and Shipbuilding, measures 532 feet in In this view the tug is ready to make the hookup connection with the barge. The length, has a beam of 87 feet, and an unusually deep stern slot for the powerful tug. combined unit will transport petroleum products from the Gulf to the East Coast. 14 Maritime Reporter/Engineering News

A new and economic transporta- tion system was recently christen- ed in New Orleans. The new sys- tem "holds the promise of develop- ing into a major element of our coastal shipping and hopefully can be the means of recapturing much of the cargo that has been lost to railroads and pipelines," according to Andrew E. Gibson, Assistant

Mr. Gibson was speaking at the christening of the tug MV Martha

R. Ingram which forms part of the most powerful tug-barge combina- tion in the United States. The tug, built by Southern Shipbuilding

Corporation, Slidell, La., and the barge I.O.S. 3301, built by Ala- bama Dry Dock and Shipbuilding

The tug was christened by Mrs.

E. Bronson Ingram, wife of the president of Ingram Corporation.

Immediately following the chris- tening the tug-barge combination entered service in the coastwise trade for a major oil company.

The Ingram Ocean Systems, Inc., the ocean transportation subsidi- ary of the Ingram Corporation, has thus motivated a new concept of deep-sea carriage of bulk com- modities by the use of a complete- ly integrated, fast-locking type tug-barge unit. The locking ar- rangement was developed and pat- ented by the Ingram Corporation (Continued next page) The 1 1,250-hp Martha R. Ingram, built by Southern Shipbuilding, Slidell, La., is capable of pushing the 285,500-barrel barge at a speed of 14 knots at full load draft.