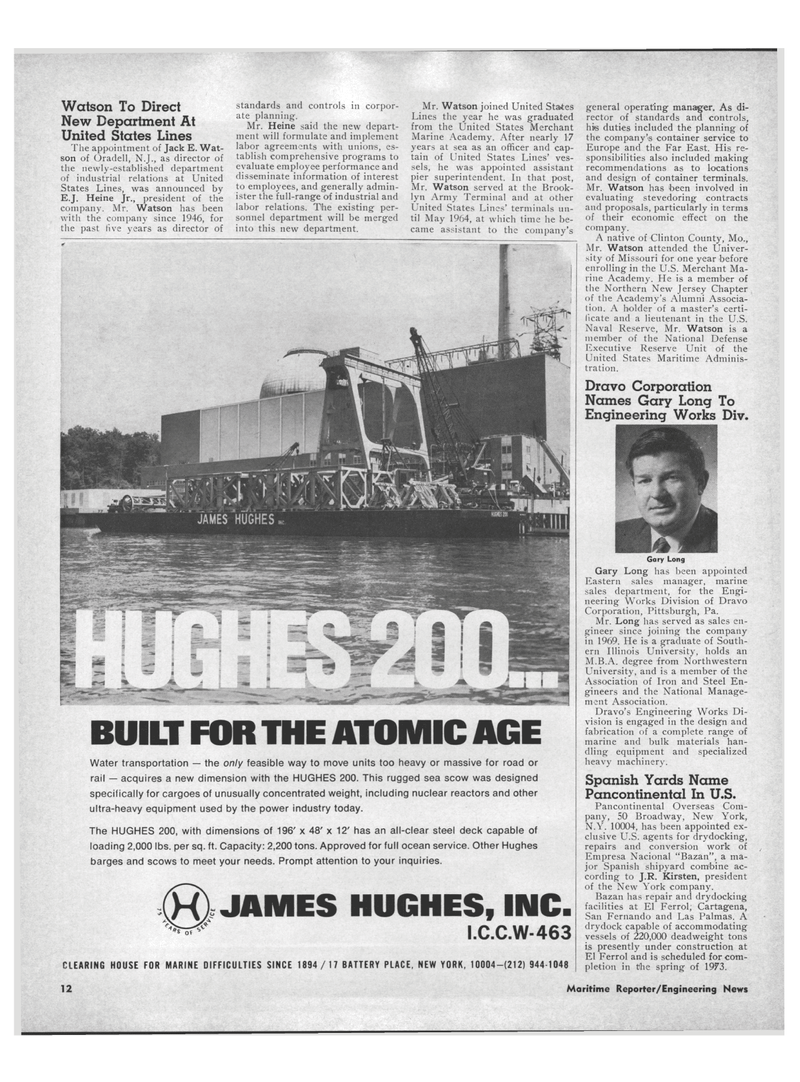 The appointment of Jack E. Wat- son of Oradell, N.J., as director of the newly-established department of industrial relations at United

States Lines, was announced by

E.J. Heine Jr., president of the company. Mr. Watson has been with the company since 1946, for the past live years as director of standards and controls in corpor- ate planning.

Mr. Heine said the new depart- ment will formulate and implement labor agreements with unions, es- tablish comprehensive programs to evaluate employee performance and disseminate information of interest to employees, and generally admin- ister the full-range of industrial and labor relations. The existing per- sonnel department will be merged into this new department.

Lines the year he was graduated from the United States Merchant

Marine Academy. After nearly 17 years at sea as an officer and cap- tain of United States Lines' ves- sels, he was appointed assistant pier superintendent. In that post,

Mr. Watson served at the Brook- lyn Army Terminal and at other

United States Lines' terminals un- til May 1964, at which time he be- came assistant to the company's general operating manager. As di- rector of standards and controls, his duties included the planning of the company's container service to

Europe and the Far East. His re- sponsibilities also included making recommendations as to locations and design of container terminals.

Mr. Watson has been involved in evaluating stevedoring contracts and proposals, particularly in terms of their economic effect on the company.

A native of Clinton County, Mo.,

Mr. Watson attended the Univer- sity of Missouri for one year before enrolling in the U.S. Merchant Ma- rine Academy. He is a member of the Northern New Jersey Chapter of the Academy's Alumni Associa- tion. A holder of a master's certi- ficate and a lieutenant in the U.S.

Naval Reserve, Mr. Watson is a member of the National Defense

Executive Reserve Unit of the

Gary Long has been appointed

Mr. Long has served as sales en- gineer since joining the company in 1969. He is a graduate of South- ern Illinois University, holds an

University, and is a member of the

Association of Iron and Steel En- gineers and the National Manage- ment Association.

Dravo's Engineering Works Di- vision is engaged in the design and fabrication of a complete range of marine and bulk materials han- dling equipment and specialized heavy machinery.

N.Y. 10004, has been appointed ex- clusive U.S. agents for drydocking, repairs and conversion work of

Bazan has repair and drydocking facilities at El Ferrol; Cartagena,

San Fernando and Las Palmas. A drydock capaible of accommodating vessels of 220,000 deadweight tons is presently under construction at

El Ferrol and is scheduled for com- pletion in the spring of 1973.

BUILT FOR THE ATOMIC AGE

Water transportation — the only feasible way to move units too heavy or massive for road or rail — acquires a new dimension with the HUGHES 200. This rugged sea scow was designed specifically for cargoes of unusually concentrated weight, including nuclear reactors and other ultra-heavy equipment used by the power industry today.