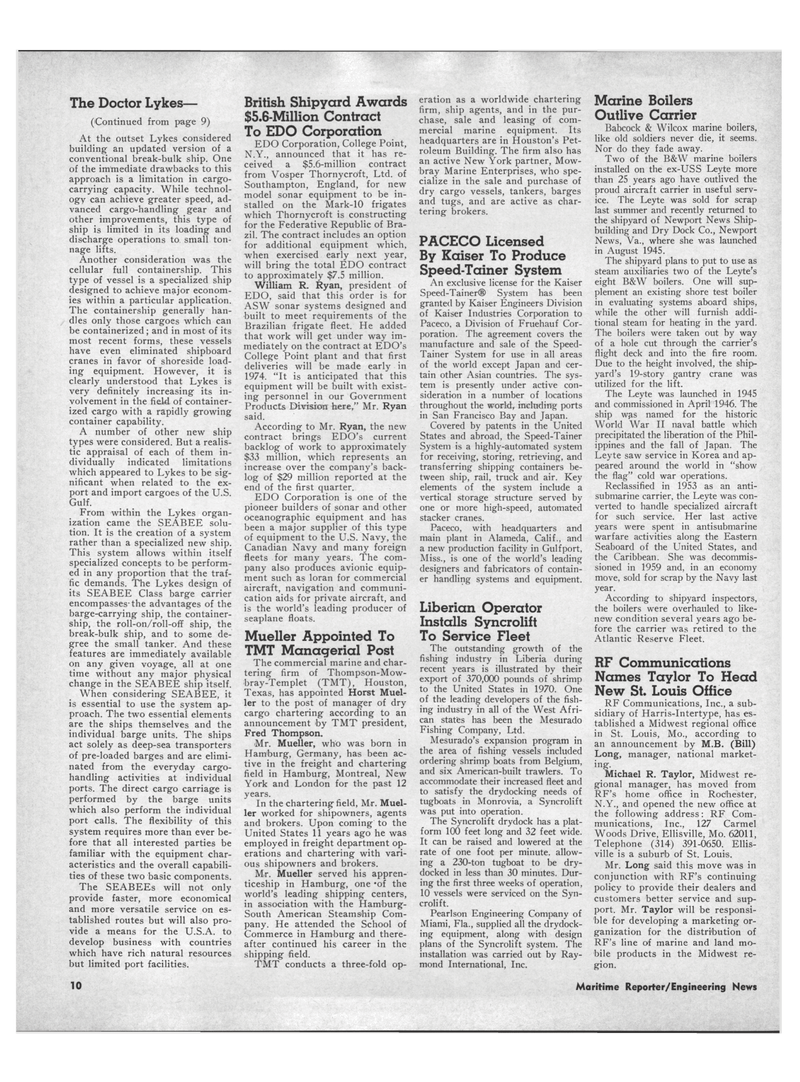 The Doctor Lykes— (Continued from page 9)

At the outset Lykes considered building an updated version of a conventional break-bulk ship. One of the immediate drawbacks to this approach is a limitation in cargo- carrying capacity. While technol- ogy can achieve greater speed, ad- vanced cargo-handling gear and other improvements, this type of ship is limited in its loading and discharge operations to small ton- nage lifts.

Another consideration was the cellular full containership. This type of vessel is a specialized ship designed to achieve major econom- ies within a particular application.

The containership generally han- dles only those cargoes which can be containerized ; and in most of its most recent forms, these vessels have even eliminated shipboard cranes in favor of shoreside load- ing equipment. However, it is clearly understood that Lykes is very definitely increasing its in- volvement in the field of container- ized cargo with a rapidly growing container capability.

A number of other new ship types were considered. But a realis- tic appraisal of each of them in- dividually indicated limitations which appeared to Lykes to be sig- nificant when related to the ex- port and import cargoes of the U.S.

From within the Lykes organ- ization came the SEABEE solu- tion. It is the creation of a system rather than a specialized new ship.

This system allows within itself specialized concepts to be perform- ed in any proportion that the traf- fic demands. The Lykes design of its SEABEE Class barge carrier encompasses-the advantages of the barge-carrying ship, the container- ship, the roll-on/roll-off ship, the break-bulk ship, and to some de- gree the small tanker. And these features are immediately available on any given voyage, all at one time without any major physical change in the SEABEE ship itself.

When considering SEABEE, it is essential to use the system ap- proach. The two essential elements are the ships themselves and the individual barge units. The ships act solely as deep-sea transporters of pre-loaded barges and are elimi- nated from the everyday cargo- handling activities at individual ports. The direct cargo carriage is performed by the barge units which also perform the individual port calls. The flexibility of this system requires more than ever be- fore that all interested parties be familiar with the equipment char- acteristics and the overall capabili- ties of these two basic components.

The SEABEEs will not only provide faster, more economical and more versatile service on es- tablished routes but will also pro- vide a means for the U.S.A. to develop business with countries which have rich natural resources but limited port facilities.

N.Y., announced that it has re- ceived a $5.6-million contract from Vosper Thornycroft, Ltd. of

Southampton, England, for new model sonar equipment to be in- stalled on the Mark-10 frigates which Thornycroft is constructing for the Federative Republic of Bra- zil. The contract includes an option for additional equipment which, when exercised early next year, will bring the total EDO contract to approximately $7.5 million.

EDO, said that this order is for

ASW sonar systems designed and built to meet requirements of the

Brazilian frigate fleet. He added that work will get under way im- mediately on the contract at EDO's

College Point plant and that first deliveries will be made early in 1974. "It is anticipated that this equipment will be built with exist- ing personnel in our Government

According to Mr. Ryan, the new contract brings EDO's current backlog of work to approximately $33 million, which represents an increase over the company's back- log of $29 million reported at the end of the first quarter.

EDO Corporation is one of the pioneer builders of sonar and other oceanographic equipment and has been a major supplier of this type of equipment to the U.S. Navy, the

Canadian Navy and many foreign fleets for many years. The com- pany also produces avionic equip- ment such as loran for commercial aircraft, navigation and communi- cation aids for private aircraft, and is the world's leading producer of seaplane floats.

Texas, has appointed Horst Muel- ler to the post of manager of dry cargo chartering according to an announcement by TMT president,

Mr. Mueller, who was born in

Hamburg, Germany, has been ac- tive in the freight and chartering field in Hamburg, Montreal, New

York and London for the past 12 years.

In the chartering field, Mr. Muel- ler worked for shipowners, agents and brokers. Upon coming to the

United States 11 years ago he was employed in freight department op- erations and chartering with vari- ous shipowners and brokers.

Mr. Mueller served his appren- ticeship in Hamburg, one -of the world's leading shipping centers, in association with the Hamburg-

South American Steamship Com- pany. He attended the School of

Commerce in Hamburg and there- after continued his career in the shipping field.

TMT conducts a three-fold op- eration as a worldwide chartering firm, ship agents, and in the pur- chase, sale and leasing of com- mercial marine equipment. Its headquarters are in Houston's Pet- roleum Building. The firm also has an active New York partner, Mow- bray Marine Enterprises, who spe- cialize in the sale and purchase of dry cargo vessels, tankers, barges and tugs, and are active as char- tering brokers.

By Kaiser To Produce

An exclusive license for the Kaiser

Paceco, a Division of Fruehauf Cor- poration. The agreement covers the manufacture and sale of the Speed-

Tainer System for use in all areas of the world except Japan and cer- tain other Asian countries. The sys- tem is presently under active con- sideration in a number of locations throughout the world, including ports in San Francisco Bay and Japan.

Covered by patents in the United

States and abroad, the Speed-Tainer

System is a highly-automated system for receiving, storing, retrieving, and transferring shipping containers be- tween ship, rail, truck and air. Key elements of the system include a vertical storage structure served by one or more high-speed, automated stacker cranes.

Paceco, with headquarters and main plant in Alameda, Calif., and a new production facility in Gulfport,

Miss., is one of the world's leading designers and fabricators of contain- er handling systems and equipment.

The outstanding growth of the fishing industry in Liberia during recent years is illustrated by their export of 370,000 pounds of shrimp to the United States in 1970. One of the leading developers of the fish- ing industry in all of the West Afri- can states has been the Mesurado

Mesurado's expansion program in the area of fishing vessels included ordering shrimp boats from Belgium, and six American-built trawlers. To accommodate their increased fleet and to satisfy the drydocking needs of tugboats in Monrovia, a Syncrolift was put into operation.

The Syncrolift drydock has a plat- form 100 feet long and 32 feet wide.

It can be raised and lowered at the rate of one foot per minute, allow- ing a 230-ton tugboat to be dry- docked in less than 30 minutes. Dur- ing the first three weeks of operation, 10 vessels were serviced on the Syn- crolift.

Miami, Fla., supplied all the drydock- ing equipment, along with design plans of the Syncrolift system. The installation was carried out by Ray- mond International, Inc.

Nor do they fade away.

Two of the B&W marine boilers installed on the ex-US S Leyte more than 25 years ago have outlived the proud aircraft carrier in useful serv- ice. The Leyte was sold for scrap last summer and recently returned to the shipyard of Newport News Ship- building and Dry Dock Co., Newport

The shipyard plans to put to use as steam auxiliaries two of the Leyte's eight B&W boilers. One will sup- plement an existing shore test boiler in evaluating systems aboard ships, while the other will furnish addi- tional steam for heating in the yard.

The boilers were taken out by way of a hole cut through the carrier's flight deck and into the fire room.

Due to the height involved, the ship- yard's 19-story gantry crane was utilized for the lift.

The Leyte was launched in 1945 and commissioned in April 1946. The ship was named for the historic

World War II naval battle which precipitated the liberation of the Phil- ippines and the fall of Japan. The

Leyte saw service in Korea and ap- peared around the world in "show the flag" cold war operations.

Reclassified in 1953 as an anti- submarine carrier, the Leyte was con- verted to handle specialized aircraft for such service. Her last active years were spent in antisubmarine warfare activities along the Eastern

Seaboard of the United States, and the Caribbean. She was decommis- sioned in 1959 and, in an economy move, sold for scrap by the Navy last year.

According to shipyard inspectors, the boilers were overhauled to like- new condition several years ago be- fore the carrier was retired to the

RF Communications, Inc., a sub- sidiary of Harris-Intertype, has es- tablished a Midwest regional office in St. Louis, Mo., according to an announcement by M.B. (Bill)

Michael R. Taylor, Midwest re- gional manager, has moved from

Mr. Long said this move was in conjunction with RF's continuing policy to provide their dealers and customers better service and sup- port. Mr. Taylor will be responsi- ble for developing a marketing or- ganization for the distribution of